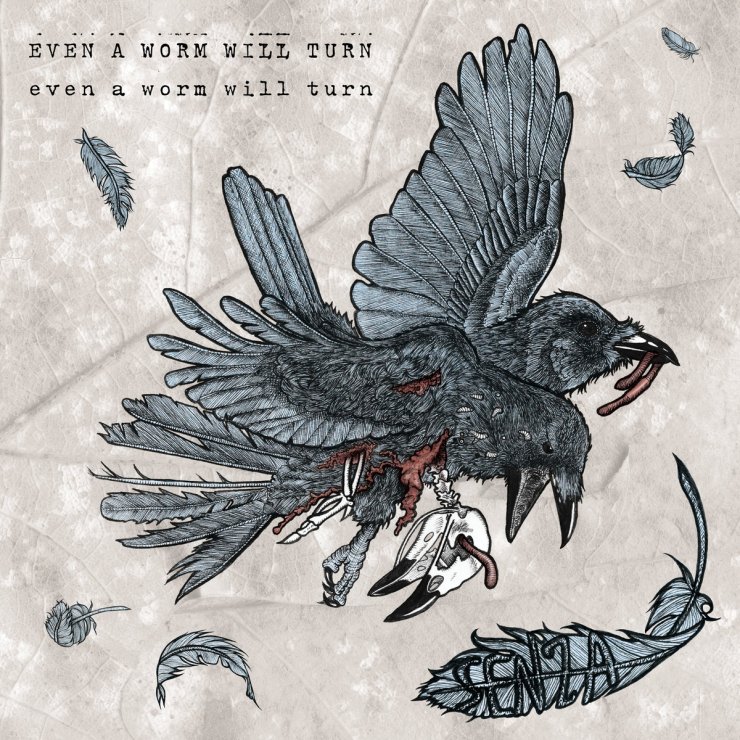 Several months ago I had the pleasure of seeing Senza here in San Francisco @ The Honey Hive Gallery, a great little intimate DIY space in a sort of more residential area, and was absolutely enchanted by them. The members, all unmiced, shared vocal duties and delivered a very raw, yet precise performance.

“Even A Worm Will Turn,” the band’s highly anticipated full-length debut, has the maturity and measured pace of albums written by seasoned veterans of the genre, and has frankly stolen my attention away from the return of other seminal screamo artists. The band plays very chaotic, technical music that certifiably broaches mathcore territory, but with all the production and emotional sensabilities of a band that has its roots in screamo.

The album begins with an atmospheric opener, but jumps right into it with the hard hitting, yet sensitive “Born of Dirt,” which soon gives way to the blackened screamo sound described above, and I don’t mean in that more sort of post-rock way that Deafheaven approaches bridging black metal and screamo: Senza have far more anguish and emotional complexity to express, and are not content to just shoegaze. Track 3, “Misornithist,” is an exercise in tension and release, with its suspenseful and staccato opening leading to a lumbering mid section and chaotic conclusion, which culminates into one of the albums most memorable, lyrical moments:

“Subdue the flames / hide the smoke / but I will burn forever.”

“Tunnel Vision,” much like “Born of Dirt,” again shows their affinity for the seamless (and I do mean seamless) combining of black metal and screamo, and bleeds just as seamlessly into the album’s acoustic interlude, “Constant Air of Casual Indifference.” The lull does not last, however, as the following track, “American Robin,” is by far the album’s most chaotic and mathcore injected passage, and serves as almost a primer for an incredible 3 song stretch into “Impostor” and “Sentience.” There is a real sense of restraint on this release that is very clear on tracks like “Impostor,” especially following a track like “American Robin,” and its middle section, much like “Misornithist,” builds suspense with clean guitars occasionally stabbed with staccato attack. This technique is used to great effect time and time again on this record, and it seems the band has great love for toying with the listener: “Sentience” almost lulls you into a sense of initial security, but then makes you beg for the release of that next hinted moment of aggression, like musical foreshadowing that very much creates suspense and a sense of tension and release. Track 9, “Swarm,” serves as the final interlude for this full-length release, sampling the sounds of falling rain and weather, belabored breath and jogging footfall, over clean guitars and arrhythmic clicks. Exhaustion, anxiety, and isolation seem to be underlying themes throughout the album.

Senza want you to feel as if you are being pursued.

“Inner Immolation” hides a huge breakdown, the album’s biggest and baddest, which hits totally unexpectedly after its more black metal leaning intro. The title track almost serves as an overture of sorts, revisiting all of  the themes thus far explored, including our fleeing character and his weather. Finally the ominous 9 minute epic “Echoes” looms its head, beginning with an almost funeral procession like pace, but soon giving way to the chaotic sonic territory the band most often occupies before concluding with its allegorical chant of “These caverns echo my cries,” ending on a few simple, yet cathartic chords.

Overall, this is masterfully executed chaotic screamo that stands shoulder to shoulder with the most seminal artists in the genre, providing a measured and mature listening experience that will please even adjacent or satellite fans of the genre.