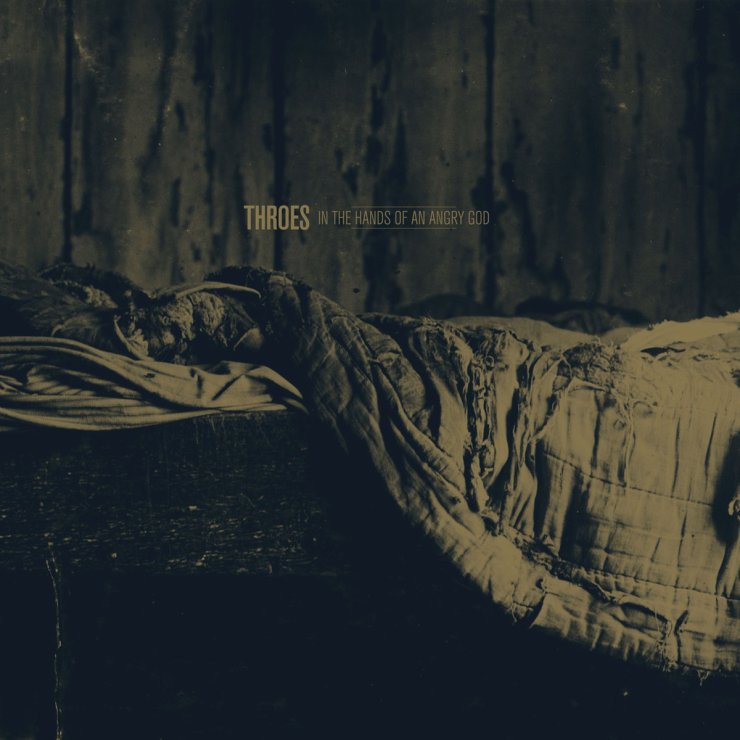 Throes‘ full-length debut, In the Hands of an Angry God, is a 40-minute display of sprawling brute force.

On their 2015 debut EP, To Dust, this Idaho-based act delivered gut-punching, gritty, dark hardcore similar to that of their previous incarnation, Bone Dance, albeit with sludgier overtones. On In the Hands of an Angry God, those sludgier tendencies are brought to the forefront, resulting in steady-paced destruction that still carries its predecessor’s angularity and venom with it.

The record is bookended by a pair of shorter, faster-paced tracks, titled “Bad Meat” and “Fang,” that hark back to the band’s previous release with their burly, dissonant hardcore stylings. The bulk of the record is made up of slow-burning, often off-kilter sludgecore monoliths that relentlessly pummel without mercy. This begins with the second track, and lead single, “They Never Spoke.” The nearly six-minute tune lurches with gargantuan groove and jagged, intertwining melodies. City-leveling production and tones, and heavy-hitting instrumentation and vocal performances highlight this track, and the album as a whole.

The doom and gloom continues on tracks like “Derelict” and “From Their Nails,” which crawl menacingly with disfigured, grime-ridden riffs toward their respective earsplitting, apocalyptic climaxes. Songs like “Nothing New” and “Carrion” seamlessly blend the band’s sludge side with their more chaotic side, resulting in instrumentation that bursts and stomps unpredictably. Things then take a more brooding, atmospheric turn during the track “Disillusion,” which features slow-building, melancholic riffs propelled by breathy, Deftones-Esque vocals (which carry over into the penultimate track, “Ruin”).

Some of the longer cuts on the record sometimes outstay their welcome after a while, often being a bit more repetitive than necessary at times. However, Throes‘ stylistic change is a welcome one overall. Everything sounds menacing, towering, ugly, and still retains the band’s affinity for hardcore viciousness. Mathcore Index advises not to sleep on this one.